JASON: Biden was talking the other day -- as he proposes to bankrupt the country once and for all -- about the Trump economy. Even though we had the greatest economic renaissance when I was in Congress working with the president to pass the Tax Cut and Jobs Act than we've had in a generation, this is what Joe Biden had to say about it.

BIDEN: Folks, trickle-down economy economics has never worked. For too long, we've had had an economy that gives every break in the world to the folks who need it least. It's time to grow the economy from the bottom up and the middle out. 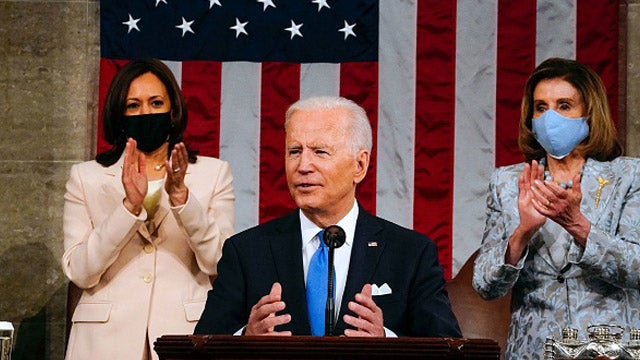 JASON: Yes, and the only way to grow the economy from the bottom up and the middle out is to create jobs. We had a record, historically low unemployment rate before covid of 3.9%, historical in the African-American community, the black community. Female unemployment at a historic low. We had more jobs than people available to fill them. Median income was skyrocketing for the lowest quintiles. All of this, all of this was good.

Repatriation of a trillion dollars for foreign profits coming back to America to invest. And then the Democrats' dream of covid as an excuse to destroy the economy, rewrite illegally election law in several states, and control your life like it's never been controlled. But Biden is lying because he's giving the tax breaks to the wealthy, not Trump. We took them away. I'll give you an example: The deduction for State And Local Taxes in high-tax states: Minnesota, California, Massachusetts, New York.

The vast majority of SALT deduction goes to incomes over $200,000 a year. So what this means is if you live in New York and pay exorbitant taxes, you can deduct those on your federal income tax, which means it's an offset for you. But guess what? Everybody else in the country has to pay more in federal taxes to make up for the loss. Guess who's trying to put that SALT deduction back as a sop to the private equity managers on Wall Street?

How about the carried interest loophole? When people like Mitt Romney take other people's money, take a public company that's healthy private, hollow it out, destroy it -- I've witnessed this firsthand, by the way -- and then they make money when they resell the company that's hollowed out for a big profit, they get taxed at capital gains rates.

I actually supported a bill in Congress to eliminate the carried interest loophole so that those commissions would be taxed at the full rate, not capital gains rates for private equity types. Not Joe Biden! These are the people that are giving the tax breaks to Wall Street because that's where they get their money. The only way to get an economy going is to ride the tide to lift all boats, as JFK used to say, and the only way to do that is to encourage two things: capital investment and work.

The only way to do that is to get capital investment back in the private sector away from bridge-to-nowhere public sector and wasteful spending, and to incentivize people to work by not paying them to stay on unemployment, not paying them not to pay their rent, not paying them for food stamps (which is 80% of the farm bill), Medicaid, you name it.

We did that with the Tax Cut and Jobs Act under President Trump. I was proud to help lead the charge. I wasn't certainly... You're not I leader as a freshman. But I voted for it, and I spoke on the floor and I pushed it, and we had the greatest economy in a generation, and now Biden is threatening it with $6 trillion in new spending in a matter of a couple of weeks. Here's what Rush had to say about it all.

What the left wants everybody to believe trickle-down is that the rich, many of whom are rich unfairly, will give their money away. "Knowing that they have more than they need and seeing their fellow citizens suffering, the rich will give that money away -- and you know, it never happens. Therefore, trickle-down doesn't work." That's not what trickle-down is. George Soros isn't giving his money away. He's donating it to causes for which he expects a return, but he's not giving it away.

Well, I take it back. Some people do, actually. You just never hear about it. But most people don't do that. So that definition of trickle-down is asinine. You know what trickle-down is? Trickle-down is how the economy works. You take your car to a car wash. You're paying the car wash to wash it. The car wash has employees. The money that you spend at the car wash trickles down to the last guy on the line that dries the car. That's trickle-down, and it works.

The more people spend and the more commerce there is, the more trickle-down. What the left wants you to think is that when the rich get their money, they hoard it and they don't spend it, which is asinine. When's the last time you saw a really rich person driving, what, a four-cylinder turbo-charged little lawn mower? You don't see it. You see 'em in Mercedes and Bentleys and Rolls-Royces and whatever the hell else.

They have these huge homes that there are people that work at. You would not believe the landscaping budget some of these evil rich people. Trickle-down is precisely what works, and the more of it, the better. It is how people earn more money, but the left has got this butchered, convoluted definition of it that the rich either don't give their money away or they don't spend it, because they don't want to share. They've got theirs, but you're not gonna get yours, and they got theirs by taking yours. 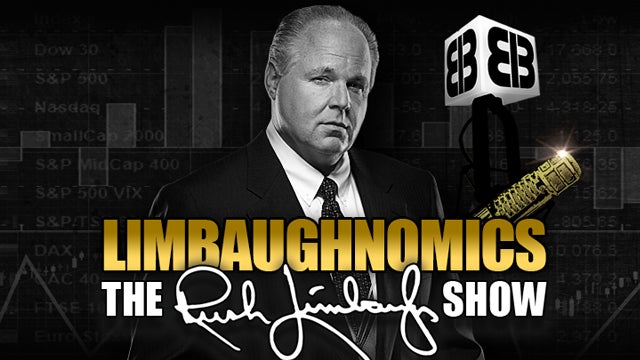 That's the asinine, cockamamie theory that they want everybody to believe. If it weren't for trickle-down, the Catholic Church wouldn't have any donations. Trickle-down is a good, good thing. It's exactly what happens. But the left has defined it in such a way that it's got a bad taste. It's got bad PR. It's got a bad brand, bad image. "Trickle-down? Yeah, that doesn't work." It does, every time it's tried. Just like abstinence, by the way. It works every time it's tried. Everybody who engages in commerce is engaging in trickle-down.

There's nobody, other than a welfare recipient, who is only on the receiving end of trickle-down.